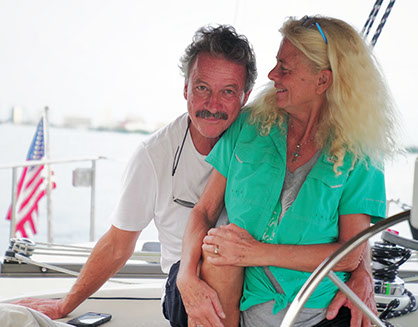 Jan’s roots in Sarasota are deep. This hometown girl since 1960, sails across from the Chaplain J.D. Hamel bay front Veteran’s Park named in honor of her father, with the key to the city both on her boat and in her heart.

U.S. Coast Guard Master Captain Tim, also a licensed and ordained minister, grew up overseas as a "Missionary Kid" (M.K.) but finished high school in Sarasota, walking with Jan in graduation. He has served as a bilingual chaplain to the Cincinnati Reds. His parents and in-laws all attended seminary in the Midwest. Tim now serves on the board of trustees of the same alma mater of his grandparents, parents, and in-laws. Tim and Jan also received their master's degrees from the same school.

Tim and Jan have been married since 1977, and began sailing these waters together while dating as teenagers. Their global adventures and Christian relief efforts have taken them to over 30 countries on 5 continents, from the Waodani (formerly known as Auca) of Ecuador to a Co-Mission project in Siberia.

We recently completed our tenth sailing trip aboard the "Key Breeze" out of Sarasota Bay.

It was truly ironic that the "Key Breeze" completed it's first 25,000 miles on our trip. We were so happy to have been a part of this auspicious occasion (even though we weren't aware of it at the time of our booking). Congratulations Tim and Jan! How proud we are as Sarasota residents to have you and the "Key Breeze" as ambassadors of our beautiful community. Everyone on board was so impressed with your genuine friendliness, willingness to accommodate everyone's needs, enthusiastic commentary of Sarasota and her beauty, business atmosphere, parks and recreation, and especially the Gulf and her pristine beaches!